Talking about lead pencils history we are probably dealing with the history of graphite pencils. But the truth is slightly more complicated – and interesting too!

Although we don’t have exact dates, we can safely claim ancient Greeks, Romans and Egyptians were using wires mead of lead for writing. Of course wires were not always looking like wires suppose to look today and they were not very similar to today’s pencils. Instead of lead other soft metals, for instance zinc, tin or silver which could be appropriately shaped to make trails on papyrus or specially treated vellum were used.

Did you know the word pencil comes from latin penicillus meaning little tail?

Writing or drawing with lead pencils was not very practical because it demanded a lot of skill and an error was very hard to correct. When people discovered graphite a whole new world of possibilities opened!

It probably started in the beginning of 16th century. What we know for sure is a discovery of huge graphite deposits in very pure form in Borrowdale (Great Britain) where it was at first used only to mark sheep. Graphite was similar to lead in appearance, only darker, so they called it plumbago (plumbum is latin for lead). Few decades after they discovered how useful can be a graphite for making cannon balls so the mine became important for military.

Graphite, this time as the material for making pencils played significant role in Napoleonic wars on the edge of 18th and 19th century. France didn’t have access to pure graphite from Britain, neither the pretty good substitute which was made by Germans from graphite dust.

Nicolas-Jacques Conte succeeded to make satisfactory product from graphite dust, mixed with clay and fired in a kiln. In this process he had a chance to make pencils of different hardness with simply varying graphite to clay ratio.

Graphite is too soft to be used as a pencil like wire or rod of lead or silver was used before. So everybody who used it as a writing or drawing media, wrapped it in some kind of protective sheet from the very beginning. Hollow stick of juniper wood was one of first standards and two carved wooden sticks with graphite between and glued together was developed from that. This is in general how pencils are still made today. 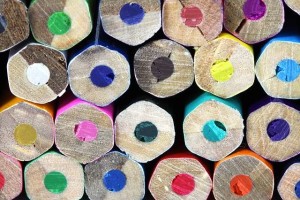 Pencils made today are not too different from pencils from several centuries ago.

In 18th century scientists proved graphite is pure carbon and has nothing to do with lead. But users of graphite pencils were still in danger or lead poisoning. The reason is pigment in color, used to cover the outside wooden part of pencils. This pigment contained lead and everybody touching or even licking the pencils was in danger for centuries – until other sorts of colors came in use.